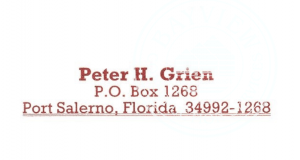 To Whom It May Concern:

We are pleased to recommend Bayview Construction Services as a highly qualified general contractor.

Bayview recently completed two commercial projects for us in Port Salerno, which has been our family’s home for decades, and is a designated community redevelopment area (CRA).

The first project was the renovation of a 50-year-old building which is part of a small shopping center on Port Salerno’s main thoroughfare, Dixie Highway. Our objectives were that the look of the finished building had to be consistent with the community’s “Florida fishing village” personality, and that the work had to be done as economically as possible.

The second project was the construction of a state-of-the-art warehouse on Cove Road, which also is withing the CRA. In the interest of both economy and time, we opted for a metal building. In the interest of economy, the 5,600 square-foot building is designed to house one or two retail stores fronting on the road, while providing a maintenance facility in the rear.

We found the overall quality of Bayview’s work far superior to most of the work we have seen in this area. We also appreciated the fact that all plans and specifications were complied with, including change orders as they occurred.

Bayview’s senior vice president, Bob Snyder; Jeff McCauley, who was the superintendent on the shopping center project; and Lea Jaroszewski, the project manager on the warehouse project, all responded to our questions and issues quickly. They also were sensitive to our needs as well as the requirements of the CRA, and Bayview completed both projects on time, within budget.

With several more properties to develop or renovate in the Port Salerno area, we look forward to working with Bayview again.

This website uses cookies to improve your experience while you navigate through the website. Out of these cookies, the cookies that are categorized as necessary are stored on your browser as they are essential for the working of basic functionalities of the website. We also use third-party cookies that help us analyze and understand how you use this website. These cookies will be stored in your browser only with your consent. You also have the option to opt-out of these cookies. But opting out of some of these cookies may have an effect on your browsing experience.
Necessary Always Enabled
Necessary cookies are absolutely essential for the website to function properly. This category only includes cookies that ensures basic functionalities and security features of the website. These cookies do not store any personal information.
Non-necessary
Any cookies that may not be particularly necessary for the website to function and is used specifically to collect user personal data via analytics, ads, other embedded contents are termed as non-necessary cookies. It is mandatory to procure user consent prior to running these cookies on your website.
SAVE & ACCEPT

Thank you for uploading your files. If there are any issues, someone will contact you shortly.